Internal Market: Selling the inside 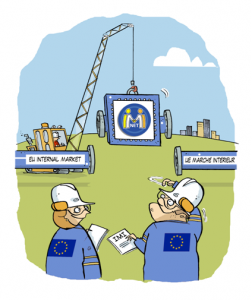 When you think of marketing, you more than likely think of marketing to your customers: How can you persuade more people to buy what you sell? But another “market” is just as important: your employees, the very people who can make the brand come alive for your customers. Yet in our work helping executives develop and carry out branding campaigns, my colleagues and I have found that companies very often ignore this critical constituency.

Why is internal marketing so important? First, because it’s the best way to help employees make a powerful emotional connection to the products and services you sell. Without that connection, employees are likely to undermine the expectations set by your advertising. In some cases, this is because they simply don’t understand what you have promised the public, so they end up working at cross-purposes. In other cases, it may be they don’t actually believe in the brand and feel disengaged or, worse, hostile toward the company. We’ve found that when people care about and believe in the brand, they’re motivated to work harder and their loyalty to the company increases. Employees are united and inspired by a common sense of purpose and identity.

Unfortunately, in most companies, internal marketing is done poorly, if at all. While executives recognise the need to keep people informed about the company’s strategy and direction, few understand the need to convince employees of the brand’s power—they take it as a given.

Employees need to hear the same messages that you send out to the marketplace. At most companies, however, internal and external communications are often mismatched. This can be very confusing, and it threatens employees’ perceptions of the company’s integrity: They are told one thing by management but observe that a different message is being sent to the public. One health insurance company, for instance, advertised that the welfare of patients was the company’s number one priority, while employees were told that their main goal was to increase the value of their stock options through cost reductions. And one major financial services institution told customers that it was making a major shift in focus from being a financial retailer to a financial adviser, but, a year later, research showed that the customer experience with the company had not changed. It turned out that company leaders had not made an effort to sell the change internally, so employees were still churning out transactions and hadn’t changed their behavior to match their new adviser role.

Enabling employees to deliver on customer expectations is important, of course, but it’s not the only reason a company needs to match internal and external messages. Another reason is to help push the company to achieve goals that might otherwise be out of reach. In 1997, when IBM launched its e-business campaign (which is widely credited for turning around the company’s image), it chose to ignore research that suggested consumers were unpre-pared to embrace IBM as a leader in e-business. Although to the outside world this looked like an external marketing effort, IBM was also using the campaign to align employees

around the idea of the Internet as the future of technology. The internal campaign changed the way employees thought about everything they did, from how they named products to how they organised staff to how they approached selling. The campaign was successful largely because it gave employees a sense of direction and purpose, which in turn restored their confidence in IBM’s ability to predict the future and lead the technology industry. Today, research shows that people are four times more likely to associate the term “e-busi-ness” with IBM than with its nearest competitor.

Perhaps even more important, by taking employees into account, a company can avoid creating a message that doesn’t resonate with staff or, worse, one that builds resentment. In 1996, United Airlines shelved its “Come Fly the Friendly Skies” slogan when presented with a survey that revealed the depth of customer resentment toward the airline industry. In an effort to own up to the industry’s shortcomings, United launched a new campaign, “Rising,” in which it sought to differentiate itself by acknowledging poor service and prom-ising incremental improvements such as better meals. While this was a logical premise for the campaign given the tenor of the times, a campaign focusing on customers’ distaste for flying was deeply discouraging to the staff. Employee resentment, ultimately made it impos-sible for United to deliver the improvements it was promising, which in turn undermined the “Rising” pledge. Three years later, United decided employee opposition was under-mining its success and pulled the campaign. It has since moved to a more inclusive brand message with the line “United,” which both audiences can embrace. Here, a fundamental principle of advertising—find and address a customer concern—failed United because it did not consider the internal market.

When it comes to execution, the most common and effective way to link internal and external marketing campaigns is to create external advertising that targets both audiences. IBM used this tactic very effectively when it launched its e-business campaign, It took out an eight-page ad in the Wall Street Journal declaring its new vision, a message directed at both customers and internal stakeholders. This is an expensive way to capture attention, but if used sparingly, it is the most powerful form of communication; in fact, you need do it only once for everyone in the company to read it. There’s a symbolic advantage as well. Such a tactic signals that the company is taking its pledge very seriously; it also signals transparency—the same message going out to both audiences.

Advertising isn’t the only way to link internal and external marketing. At Nike, a number of senior executives now hold the additional title of “Corporate Storyteller.” They deliberately avoid stories of financial successes and concentrate on parables of “just doing it,” reflecting and reinforcing the company’s ad campaigns. One tale, for example, recalls how legendary coach and Nike cofounder Bill Bowerman, in an effort to build a better shoe for his team, poured rubber into the family waffle iron, giving birth to the prototype of Nike’s famous Waffle Sole. By talking about such inventive moves, the company hopes to keep the spirit of innovation that characterises its ad campaigns alive and well within the company.

But while their messages must be aligned, companies must also keep external promises a little ahead of internal realities. Such promises provide incentives for employees and give them something to live up to. In the 1980s, Ford turned “Quality Is Job 1” from an internal rallying cry into a consumer slogan in response to the threat from cheaper, more reliable Japanese cars. It did so before the claim was fully justified, but by placing it in the public arena, it gave employees an incentive to match the Japanese. If the promise is pushed too far ahead, however, it loses credibility. When a beleaguered British Rail launched a cam-paign announcing service improvements under the banner “We’re Getting There,” it did so prematurely. By drawing attention to the gap between the promise and the reality, it prompted destructive press coverage. This, in turn, demoralised staff, who had been legiti-mately proud of the service advances they had made.

Do the following statements agree with the claims of the writer in Reading Passage 3?

In boxes 1-8 on your answer sheet, write

1     A strong conviction in the brand can contribute to higher job performance.

2     It is common for companies to overlook the necessity for internal communication.

3     Consumers were ready to view IBM as a leader in e-business before the advertising campaign.

4     United Airlines’ failure in its branding campaign was due to the bad advice of an advertisement agency.

5     United Airlines eventually abolished its campaign to boost image as the result of a market research.

6     It is an expensive mistake for IBM to launch its new e-business campaign.

7     Nike employees claimed that they were inspired by their company tales.

8     A slight difference between internal and external promises can create a sense of purpose.