Do the following statements agree with the information given in Reading Passage 1? Write

TRUE if the statement agrees with the information

FALSE if the statement contradicts the information

NOT GIVEN if there is no information on this

The Origins Of Laughter 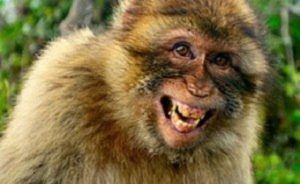 While joking and wit are uniquely human inventions, laughter certainly is not. Other creatures, including chimpanzees, gorillas and even rats, laugh. The fact that theylaugh suggests that laughter has been around for a lot longer than we have.

There is no doubt that laughing typically involves groups of people. “Laughter evolved as a signal to others — it almost disappears when we are alone,” says Robert Provine, a neuroscientist at the University of Maryland. Provine found that most laughter comes as a polite reaction to everyday remarks such as “see you later”, rather than anything particularly funny. And the way we laugh depends on the company we’re keeping. Men tend to laugh longer and harder when they are with other men, perhaps as a way of bonding. Women tend to laugh more and at a higher pitch when men are present, possibly indicating flirtation or even submission.

To find the origins of laughter, Provine believes we need to look at play. He points out that the masters of laughing are children, and nowhere is their talent more obvious than in the boisterous antics, and the original context is play. Well-known primate watchers, including Dian Fossey and Jane Goodall, have long argued that chimps laugh while at play. The sound they produce is known as a pant laugh. It seems obvious when you watch their behavior — they even have the same ticklish spots as we do. But after removing the context, the parallel between human laughter and a chimp’s characteristic pant laugh is not so clear. When Provine played a tape of the pant laughs to 119 of his students, for example, only two guessed correctiy what it was.

These findings underline how chimp and human laughter vary- When we laugh the sound is usually produced by chopping up a single exhalation into a series of shorter with one sound produced on each inward and outward breath. The question is: does this pant laughter have the same source as our own laughter? New research lends weight to the idea that it does. The findings come from Elke Zimmerman, head of the Institute for Zoology in Germany, who compared the sounds made by babies and chimpanzees in response to tickling during the first year of; their life. Using sound spectrographs to reveal the pitch and intensity of vocalizations, she discovered that chimp and human baby laughter follow broadly the same pattern. Zimmerman believes the closeness of baby laughter to chimp laughter supports the idea that laughter was around long before humans arrived on the scene. What started simply as a modification of breathing associated with enjoyable and play fulstarted simply as a modification of breathing associated with enjoyable and playful interactions has acquired a symbolic meaning as an indicator of pleasure.