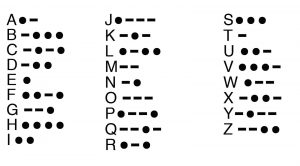 Morse code is being replaced by a new satellite-based system for sending dis-tress calls at sea. Its dots and dashes have had a good run for their money.

A “Calling all. This is our last cry before our eternal silence.” Surprisingly this message, which flashed over the airwaves in the dots and dashes of Morse code on January 31st 1997, was not a desperate transmission by a radio operator on a sinking ship. Rather, it was a message signal-ling the end of the use of Morse code for distress calls in French waters. Since 1992 countries around the world have been decommissioning their Morse equipment with similar (if less poetic) sign-offs, as the world’s shipping switches over to a new satellite-based arrangement, the Global Maritime Distress and Safety System. The final deadline for the switch-over to GMDSS is February 1st, a date that is widely seen as the end of art era.

B The code has, however, had a good history. Appropriately for a technology commonly associ-ated with radio operators on sinking ships, the idea of Morse code is said to have occurred to Samuel Morse while he was on board a ship crossing the Atlantic, At the time Morse Was a painter and occasional inventor, but when another of the ships passengers informed him of recent advances in electrical theory, Morse was suddenly taken with the idea of building an electric telegraph to send messages in codes. Other inventors had been trying to do just that for the best part of a century. Morse succeeded and is now remembered as “the father of the tele-graph” partly thanks to his single-mindedness—it was 12 years, for example, before he secured money from Congress to build his first telegraph line—but also for technical reasons.

C Compared with rival electric telegraph designs, such as the needle telegraph developed by William Cooke and Charles Wheatstone in Britain, Morses design was very simple: it required little more than a “key” (essentially, a spring-loaded switch) to send messages, a clicking “sounder” to receive them, and a wire to link the two. But although Morses hardware was simple, there was a catch: in order to use his equipment, operators had to learn the special code of dots and dashes that still bears his name. Originally, Morse had not intended to use combinations of dots and dashes to represent individual letters. His first code, sketched in his notebook during that transatlantic voyage, used dots and dashes to represent the digits 0 to 9. Morses idea was that messages would consist of strings of numbers corresponding to words and phrases in a special numbered dictionary. But Morse later abandoned this scheme and, with the help of an associate, Alfred Vail, devised the Morse alphabet, which could be used to spell out messages a letter at a time in dots and dashes.

D At first, the need to learn this complicated-looking code made Morses telegraph seem impossibly tricky compared with other, more user-friendly designs, Cookes and Wheatstones telegraph, for example, used five needles to pick out letters on a diamond-shaped grid. But although this meant that anyone could use it, it also required five wires between telegraph stations. Morses telegraph needed only one. And some people, it soon transpired, had a natural facility for Morse code.

E As electric telegraphy took off in the early 1850s, the Morse telegraph quickly became domi-nant. It was adopted as the European standard in 1851, allowing direct connections between the telegraph networks of different countries. (Britain chose not to participate, sticking with needle telegraphs for a few more years.) By this time Morse code had been revised to allow for accents and other foreign characters, resulting in a split between American and International Morse that continues to this day.

F On international submarine cables, left and right swings of a light-beam reflected from a tiny rotating mirror were used to represent dots and dashes. Meanwhile a distinct telegraphic sub-culture was emerging, with its own customs and vocabulary, and a hierarchy based on the speed at which operators could send and receive Morse code. First-class operators, who could send and receive at speeds of up to 45 words a minute, handled press traffic, securing the best-paid jobs in big cities. At the bottom of the pile were slow, inexperienced rural operators, many of whom worked the wires as part-timers. As their Morse code improved, however, rural opera-tors found that their new-found skill was a passport to better pay in a city job. Telegraphers soon, swelled the ranks of the emerging middle classes. Telegraphy was also deemed suitable work for women. By 1870, a third of the operators in the Western Union office in New York, the largest telegraph office in America, were female.

G In a dramatic ceremony in 1871, Morse himself said goodbye to the global community of telegraphers he had brought into being. After a lavish banquet and many adulatory speeches, Morse sat down behind an operators table and, placing his finger on a key connected to every telegraph wire in America, tapped out his final farewell to a standing ovation. By the time of his death in 1872, the world was well and truly wired: more than 650,000 miles of telegraph line and 30,000 miles of submarine cable were throbbing with Morse code; and 20,000 towns and villages were connected to the global network. Just as the Internet is today often called an “information superhighway”, the telegraph was described in its day as an “instantaneous highway of thought”,

H But by the 1890s the Morse telegraph’s heyday as a cutting-edge technology was coming to an end, with the invention of the telephone and the rise of automatic telegraphs, precursors of the teleprinter, neither of which required specialist skills to operate. Morse code, however, was about to be given a new lease of life thanks to another new technology: wireless. Following the invention of radiotelegraphy by Guglielmo Marconi in 1896, its potential for use at sea quickly became apparent. For the first time, ships could communicate with each other, and with the shore, whatever the weather and even when out of visual range. In 1897 Marconi successfully sent Morse code messages between a shore station and an Italian warship 19km (12 miles) away. By 1910, Morse radio equipment was commonplace on ships.

Choose the correct heading for paragraphs A-H from the list of headings below. Write the correct number, i-xi, in boxes 1-8 on your answer sheet.