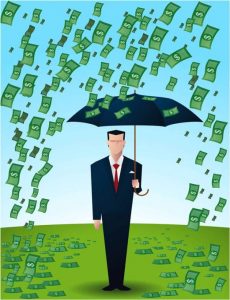 Sometimes ideas just pop up out of the blue. Or in Charlie Paton’s case, out of
the rain. “I was in a bus in Morocco travelling through the desert,” he remembers. “It
had been raining and the bus was full of hot, wet people. The windows steamed up
and I went to sleep with a towel against the glass. When I woke, the thing was
soaking wet. I had to wring it out. And it set me thinking. Why was it so wet?”
The answer, of course, was condensation. Back home in London, a physicist
friend, Philip Davies, explained that the glass, chilled by the rain outside, had cooled
the hot humid air inside the bus below its dew point, causing droplets of water to
form on the inside of the window. Intrigues, Paton –a lighting engineer by profession
–started rigging up his own equipment. “I made my own solar stills. It occurred to me
that you might be able to produce water in this way in the desert, simply by cooling
the air. I wondered whether you could make enough to irrigate fields and grow
crops.”
Today, a decade on, his dream has taken shape as a giant greenhouse on a
desert island off Abu Dhabi in the Persian Gulf –the first commercially viable version
of his “seawater greenhouse”. Local scientists, working with Paton under a licence
from his company Light Works, are watering the desert and growing vegetables in
what is basically a giant dew-making machine that produces fresh water and cool air
from sun and seawater. In awarding Paton first prize in a design competition two
years ago, Marco Goldschmied, president of the Royal Institute of British Architects,
called it “a truly original idea which has the potential to impact on the lives of
millions of people living in coastal water-starved areas around the world”.
The design has three main parts (see Graphic). The greenhouse faces into the
prevailing wind so that hot, dry desert air blows in through the front wall of
perforated cardboard, kept wet and cool by a constant trickle of seawater pumped up
from the nearby shoreline. The evaporating seawater cools and moistens the air. Last
June, for example, when the temperature outside the Abu Dhabi greenhouse was
46°C, it was in the low 30s inside. While the air outside was dry, the humidity in the
greenhouse was 90 percent. The cool, moist air allows the plants to grow faster, and
because much less water evaporates from the leaves their demand for moisture drops
dramatically. Paton’s crops thrived on a single litre of water per square meter per day,
compared to 8 litres if they were growing outside.
The second feature also cools the air for the plants. Paton has constructed a
doubled-layered roof with an outer layer of clear polythene and an inner, coated layer

that reflects infrared light. Visible light can stream through to maximize
photosynthesis, while heat from the infrared radiation is trapped in the space between
the layers, away from the plants.
At the back of the greenhouse sits the third element, the main water-production
unit. Just before entering this unit, the humid air of the greenhouse mixes with the
hot, dry air from between the two layers of the roof. This means the air can absorb
more moisture as it passes through a second moist cardboard wall. Finally, the hot
saturated air hits a condenser. This is a metal surface kept cool by still more seawater
–the equivalent of the window on Paton’s Moroccan bus. Drops of pure distilled
water form on the condenser and flow into a tank for irrigating the crops.
The greenhouse more or less runs itself. Sensors switch everything on when
the sun rises and alter flows of air and seawater through the day in response to
changes in temperature, humidity and sunlight. On windless days, fans ensure a
constant flow of air through the greenhouse. “Once it is tuned to the local
environment, you don’t need anyone there for it to work,” says Paton. “We can run
the entire operation off one 13-amp plug, and in future we could make it entirely
independent of the grid, powered from a few solar panels.”
The net effect is to evaporate seawater into hot desert air, then recondense the
moisture as fresh water. At the same time, cool moist air flows through the
greenhouse to provide ideal conditions for the crops. The key to the seawater
greenhouse’s potential is its unique combination of desalination and air conditioning.
By tapping the power of the sun it can cool as efficiently as a 500-kilowatt air
conditioner while using less than 3 kilowatts of electricity. In practice, it evaporates
3000 litres of seawater a day and turns it into about 800 litres of fresh water –just
enough to irrigate the plants. The rest is lost as water vapour.
Critics point out that construction costs of £25 per square meter mean the water
is twice as expensive as water from a conventional desalination plant. But the
comparison is misleading, says Paton. The natural air conditioning in the greenhouse
massively increases the value of that water. Because the plants need only an eighth of
the water used by those grown conventionally, the effective cost is only a quarter that
of water from a standard desalinator. And costs should plummet when mass
production begins, he adds.
Best of all, the greenhouses should be environmentally friendly. “I suppose
there might be aesthetic objections to large structures on coastal sites,” says Harris,
“but it is a clean technology and doesn’t produce pollution or even large quantities of
hot water.”

Questions 1-5
Complete the diagram below using NO MORE THAN TWO WORDS from the
passage.
Write your answers in boxes 1-5 on your answer sheet.