Placebo Effect – The Power of Nothing 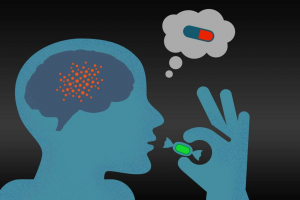 Geoff Watts, New Scientist (May26th, 2001)
A Want to devise a new form of alternative medicine? No problem. Here is the recipe. Be warm, sympathetic, reassuring and enthusiastic. Your treatment should involve physical contact, and each session with your patients should last at least half an hour. Encourage your patients to take an active part in their treatment and understand how their disorders relate to the rest of their lives. Tell them that their own bodies possess the true power to heal. Make them pay you out of their own pockets. Describe your treatment in familiar words, but embroidered with a hint of mysticism: energy fields, energy flows, energy blocks, meridians, forces, auras, rhythms and the like. Refer to the knowledge of an earlier age: wisdom carelessly swept aside by the rise and rise of blind, mechanistic science. Oh, come off it, you are saying. Something invented off the top of your head could not possibly work, could it?

B Well yes, it could-and often well enough to earn you a living. A good living if you are sufficiently convincing, or, better still, really believes in your therapy. Many illnesses get better on their own, so if you are lucky and administer your treatment at just the right time you will get the credit. But that’s only part of it. Some of the improvement really would be down to you. Your healing power would be the outcome of a paradoxical force that conventional medicine recognizes but remains oddly ambivalent about: the placebo effect.

C Placebos are treatments that have no direct effect on the body, yet still work because the patient has faith in their power to heal. Most often the term refers to a dummy pill, but it applies just as much to any device or procedure, from a sticking plaster to a crystal to an operation. The existence of the placebo effect implies that even quackery may confer real  benefits, which is why any mention of placebo is a touchy subject for many practitioners of complementary and alternative medicine, who are likely to regard it as tantamount to a charge of charlatanism. In fact, the placebo effect is a powerful part of all medical care, orthodox or otherwise, though its role is often neglected or misunderstood.

D One of the great strengths of CAM may be its practioners’ skill in deploying the placebo effect to accomplish real healing. “Complementary practitioners are miles better at producing non-specific effects and good therapeutic relationships,” says Edzard Ernst, professor of CAM at Exeter University. The question is whether CAM could be integrated into conventional medicine, as some would like, without losing much of this power.

E At one level, it should come as no surprise that our state of mind can influence our physiology: anger opens the superficial blood  vessels of the face; sadness pumps the tear glands. But exactly how placebos work their medical magic is still largely unknown. Most of the scant research done so far has focused on the control of pain, because it’s one of the commonest complaints and lends itself to experimental study. Here, attention has turned to the endorphins, morphine-like neurochemicals known to help control pain.

F But exactly how placebos work their medical magic is still largely unknown. Most of the scant research to date has focused on the control of pain, because it’s one of the commonest complaints and lends itself to experimental study. Here, attention has turned to the endorphins, natural counterparts of morphine that are known to help control pain. “Any of the neurochemicals involved in transmitting pain impulses or modulating them might also be involved in generating the placebo response,” says Don Price, an oral surgeon at the University of Florida who studies the placebo effect in dental pain.

G “But endorphins are still out in front.”That case has been strengthened by the recent work of Fabrizio Benedetti of the University of Turin, who showed that the placebo effect can be abolished by a drug, naloxone, which blocks the effects of endorphins. Benedetti induced pain in human volunteers by inflating a blood-pressure cuff on the forearm. He did this several times a day for several    days, using morphine each time to control the pain. On the final day, without saying anything, he replaced the morphine with a saline solution. This still relieved the subjects’ pain: a placebo effect. But when he added naloxone to the saline the pain relief disappeared. Here was direct proof that placebo analgesia is mediated, at least in part, by these natural opiates..

H Still, no one knows how belief triggers endorphin release, or why most people can’t achieve placebo pain relief simply by willing it. Though scientists don’t know exactly how placebos work, they have accumulated a fair bit of knowledge about how to trigger the effect. A London rheumatologist found, for example, that red dummy capsules made more effective painkillers than blue, green or yellow ones. Research on American students revealed that blue pills make better sedatives than pink, a color more suitable for stimulants. Even branding can make a difference: if Aspro or Tylenol are what you like to take for a headache, their chemically identical generic equivalents may be less effective.

I It matters, too, how the treatment is delivered. Decades ago, when the major tranquillizer chlorpromazine was being introduced, a doctor in Kansas categorized his colleagues according to whether they were keen on it, openly skeptical of its benefits, or took a “let’s    try and   see” attitude. His conclusion: the more enthusiastic the doctor, the better the drug performed. And this year Ernst surveyed published studies that compared doctors’ bedside manners. The studies turned up one consistent finding: “Physicians who adopt a warm, friendly and reassuring manner,” he reported, “are more effective than those whose consultations are formal and do not offer reassurance.”

J  Warm, friendly and reassuring is precisely CAM’S strong suits, of course. Many of the ingredients of that opening  recipe—the physical contact, the generous swathes of time, the strong hints of supernormal healing power are just the kind of thing likely to impress patients. It’s hardly surprising, then, that complementary practitioners are generally best at mobilizing the placebo effect, says Arthur Kleinman, professor of social anthropology at Harvard University.