THE BRIDGE THAT SWAYED 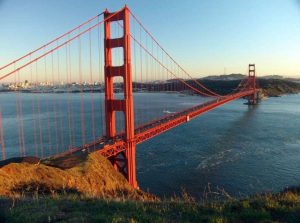 When the London Millennium footbridge was opened in June 2000, it swayed alarmingly. This generated huge public interest and the bridge became known as London’s “wobbly bridge. ”

The Millennium Bridge is the first new bridge across the river Thames in London since Tower Bridge opened in 1894, and it is the first ever designed for pedestrians only. The bridge links the City of London near St Paul’s Cathedral with the Tate Modern art gallery on Bankside.

The bridge opened initially on Saturday 10th June 2000. For the opening ceremony, a crowd of over 1,000 people had assembled on the south half of the bridge with a band in front. When they started to walk across with the band playing, there was immediately an unexpectedly pronounced lateral movement of the bridge deck. “It was a fine day and the bridge was on the route of a major charity walk,” one of the pedestrians recounted what ho saw that day. “At first, it was still. Then if began to sway sideways, just slightly. Then, almost from one moment to the next, when large groups of people were crossing, the wobble intensified. Everyone had to stop walking to retain balance and sometimes to hold onto the hand rails for support.” Immediately it was decided to limit the number of people on the bridge, and the bridge was dubbed the ‘wobbly’ bridge by the media who declared it another high-profile British Millennium Project failure. In older to fully investigate and resolve the issue the decision was taken to close the bridge on 12th June 2000.

Arup, the leading member of the committee in charge of the construction of the bridge, decided to tackle the issue head on. They immediately undertook a fast-track research project to seek the cause and the cure. The embarrassed engineers found the videotape that day which showed the center span swaying about 3 inches sideways every second and the south span 2 inches every 1.25 seconds. Because there was a significant wind blowing on the opening days (force 3-4) and the bridge had been decorated with large flags, the engineers first thought that winds might be exerting excessive force on the many large flags and banners, but it was rapidly concluded that wind buffeting had not contributed significantly to vibration of the bridge. But after measurements were made in university laboratories of the effects of people? walking on swaying platforms and after large-scale experiments with crowds of pedestrians were conducted on the bridge itself, a new understanding and a new theory were developed.

The unexpected motion was the result of a natural human reaction to small lateral movements. It is well known that a suspension bridge has tendency to sway when troops march over it in lockstep, which is why troops arc required to break step when crossing such a bridge. “If we walk on a swaying surface we tend to compensate and stabilise ourselves by spreading our legs further apart but this increases the lateral push”. Pat Dallard, the engineer at Arup, says that you change the way you walk to match what the bridge is doing. It is an unconscious tendency for pedestrians to match their footsteps to the sway, thereby exacerbating it even more. “It’s rather like walking on a rolling ship deck you move one way and then the other to compensate for the roll.” The way people walk doesn’t have to match exactly the natural frequency of the bridge as in resonance the interaction is more subtle. As the bridge moves, people adjust the way they walk in their own manner. The problem is that when there are enough people on the bridge the total sideways push can overcome the bridge’s ability to absorb it. The movement becomes excessive and continues to increase until people begin to have difficulty in walking they may even have to hold on to the rails.

Professor Fujino Yozo of Tokyo University, who studied the earth-resistant Toda Bridge in Japan, believes the horizontal forces caused by walking, running or jumping could also in turn cause excessive dynamic vibration in the lateral direction in the bridge. He explains that as the structure began moving, pedestrians adjusted their gait to the same lateral rhythm as the bridge; the adjusted footsteps magnified the motion just like when four people all stand up in small boat at the same time. As more pedestrians locked into the same rhythm, the increasing oscillation led to the dramatic swaying captured on film until people stopped walking altogether, because they could not even keep upright.

In order to design a method of reducing the movements, an immediate research program was launched by the bridge’s engineering designer Arup. It was decided that the force exerted by the pedestrians had to be quantified and related to the motion of the bridge. Although there are some descriptions of this phenomenon in existing literature, none of these actually quantifies the force. So there was no quantitative analytical way to design the bridge against this effect. The efforts to solve the problem quickly got supported by a number of universities and research organisations.

The tests at the University of Southampton involved a person walking on the spot on a small shake table. The tests at Imperial College involved persons walking along a specially built, 7.2m-long platform, which could be driven laterally at different frequencies and amplitudes. These tests have their own limitations. While the Imperial College test platform was too short that only seven or eight steps could be measured at one time, the “walking on the spot” test did not accurately replicate forward walking, although many footsteps could be observed using this method. Neither test could investigate any influence of other people in a crowd on the behavior of the individual tested.

The results of the laboratory tests provided information which enabled the initial design of a retrofit to be progressed. However, unless the usage of the bridge was to be greatly restricted, only two generic options to improve its performance were considered feasible. The first was to increase the stiffness of the bridge to move all its lateral natural frequencies out of the range that could be excited by the lateral footfall forces, and the second was to increase the damping of the bridge to reduce the resonant response.