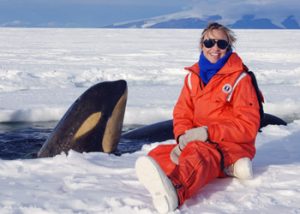 Write the correct letter in boxes 1-5 on your answer sheet.

1. In paragraph B, the author intends to
2. Why should Australian farmers keep an eye on the Antarctic ocean temperature?
3. The decrease in the number of whales and seabirds is due to
4. What is the final effect of the katabatic winds?
5. What factor drives Antarctic water to move beyond the continental shelf?